More than 1.6 million kilograms of fresh fruit and vegetables – worth more than $4.8 million dollars – donated by South Australian growers and wholesalers has contributed to a record number of meals being delivered to families in need by Foodbank SA in the last 12 months.

The 1,625,000 kilograms of fresh fruit and vegetables in the 2019/20 financial year has contributed to Foodbank SA’s ability to provide in excess of 6.6 million meals across the state – an increase of 880,000 since last year.

In a unique partnership with the South Australian Produce Market (SAPM), growers and wholesalers donate fresh food and vegetables every day from the Pooraka market site, which is then distributed across the Foodbank SA’s extensive network of 496 welfare agencies and supporting more than 500 school programs across the state.

More than 100 growers and wholesalers participate in the program, donating first and second grade produce either through the market or direct from the farm gate or packing shed. 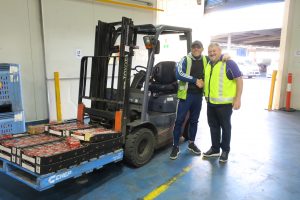 Foodbank SA says the food is distributed to more than 126,000 marginalised South Australians each month – one third being children.

Foodbank SA chief executive officer Greg Pattinson said the record result highlighted the benefits of working directly with suppliers to make the most of available resources – whilst responding to the increasing need in the community.

“When we started this partnership nearly a decade ago, we were only receiving 100,000 kilograms as donations per year. We set an ambitious target to meet the growing need and sought the support from SAPM and their producers. To see that now hit 1.625 million kilograms annually is amazing, and has made a significant difference in the amount of support we can provide families who are struggling to put food on the table,” he said.

“We know South Australians have a gross shortage of fruit and vegetables in their diets, particularly those in need. This program has contributed directly to providing nutritious meals to some of South Australia’s most vulnerable. 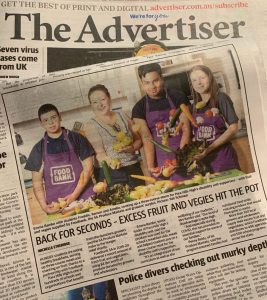 “Prior to working with the SA Produce Market , we were delivering a far larger proportion of tinned and non-perishable items. It is important that the families have balanced and nutritional options, given that the fruit and vegetables are an important part in the diet. Getting the right food into the mouths of South Australians, particularly children, was a key aim and it’s important we continue to do this and grow our reach.”

“We take this opportunity to thank all of the donors; growers, wholesalers, farmers, pack sheds that generously donate to Foodbank, together we can end hunger in this state.”

Angelo Demasi, South Australian Produce Market Chief Executive Officer, said “We are thrilled to reach this milestone and are thankful to the generous donations from the South Australian growers who themselves have had challenges in 2020.”