Providing Fresh Produce as part of the Food Security Solution

In the ten years since becoming a permanent fixture in the South Australian Produce Market, one of the country’s largest hunger-relief charities has been able to significantly increase its distribution of fresh produce within South Australia.

Foodbank’s role is to work with the food industry to capture surplus edible food and groceries and redistribute it either via welfare agencies or direct onto food-insecure members of the community. General Manager and Founder of the South Australian charity, Leigh Royans says that a decade ago it was barely sourcing 100 kilograms of fresh fruit and vegetables on an annual basis, but today that figure sits at over 1.6 million kilograms per year.

He puts a key part of their successful growth down to having a physical warehouse with cool-room and processing space within the wholesale produce market precinct in Adelaide. This unique partnership established with the market authority, SA Produce Market Ltd (SAPML), has allowed Foodbank to more readily create alliances with wholesalers who in turn donate surpluses produce. In correlation to this Foodbank also developed important partnerships with growers and pack-houses across the various horticultural hubs within the state, using the market Unloading Service to help manage donation receipts.

“To be perfectly frank, a decade ago our fresh produce capture and provision was ‘rather pathetic’. It was a meagre 0.6 per cent of the total food we distributed annually,” he said. “Half of one per cent was not an adequate mixture of healthy fresh produce in anyone’s diet, let alone someone who is experiencing tough times. I wanted to address this using a partnership with SAPML as the central strategy. With this in mind, we met with Market CEO Angelo (Demasi) and discussed our proposal to greatly increase fresh produce capture via a central warehouse facility in the market. Being located in close proximity to wholesalers, near the central market transport freight-hub, has certainly had a direct bearing on our substantial growth in fresh produce capture.” 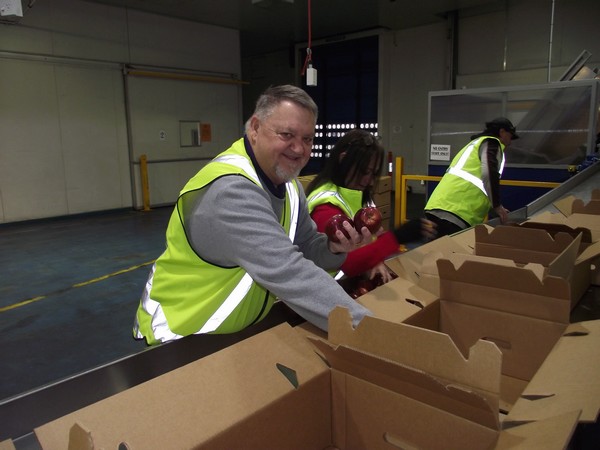 Foodbank is a not for profit organisation and so all donated fruit and vegetables received are re-gifted free onto welfare agencies or direct to client families. Agencies such as Salvation Army, St Vincent de Paul, Anglicare, Centacare, Baptist Care Uniting Communities, Lutheran Community Care and hundreds of others are keen to receive and distribute fresh fruit and vegetables. Mr Royans says Foodbank SA’s fruit and vegetable program is a critical service that delivers healthy outcomes for people in need.

“Over the last decade fresh produce has gone from 0.6 per cent to around 40 per cent of our total food distributed annually – and that’s just about the right mix,” Mr Royans said.” Often families experiencing hardship are forced to cut corners and cannot afford 2-3 balanced meals each day. We want to make sure a part of the food security solution includes a healthy percentage of fresh fruits and vegetables.”

Foodbank SA operates from warehouses and smaller service hubs across metropolitan Adelaide, from Elizabeth to Christies Beach and in key country centres such as Murray Bridge, Berri, Mt Gambier, Whyalla and Alice Springs. These outlets are strategically located to help vulnerable people have access to affordable food supplies. Mr Royans says the partnership created with the SA Produce Market Ltd at Pooraka in South Australia is unique.

“The whole idea of being very visible daily in the main market enables 100 wholesalers and growers to easily gift surplus produce,” he said. “But that’s not where things start or end. Supply also comes directly from farms and packing houses scattered around the state. We knew that to really lift supply to the required level we needed to work both in the market and externally with growers and packing sheds. Doing this has enabled the growth in F&V volumes we have witnessed.”

He added that the turnaround time from receipt of donated produce at their market warehouse to the time it is donated back onto welfare groups or direct to families can be as little as 24-48hours, depending on how much sorting and processing is required for each donation.

“We don’t always receive the produce in an ideal condition of course, although mostly this is the case,” he said. “Some product donations need more handling/sorting before being ready for gifting to families. Most donor partners help us by pre-washing produce they donate prior. Retailers also donate regularly, sometimes products they’ve refused on appearance/quality grounds (but still edible), sometimes merely due to the shorter shelf-life of products. If we receive product relatively quickly, then we can get it back out to our outlets for distribution.” 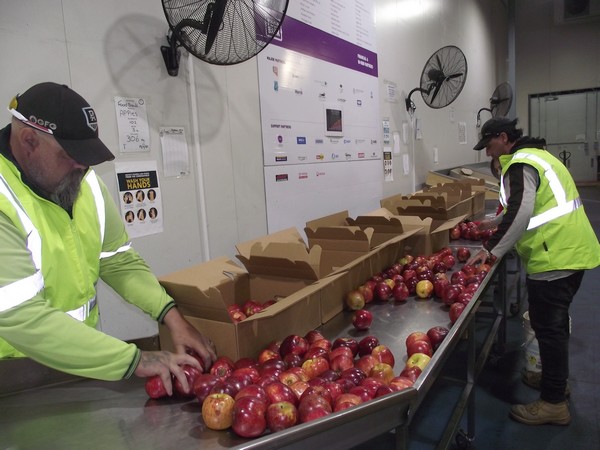 Foodbank also supplies fresh produce in times of disaster relief. Mr Royans says the company was very quick to respond to the bushfires on Kangaroo Island in January 2020, providing relief for residents and emergency services during the event.

“Within days of the last tragic fires we had arranged key produce receipts from various produce partners across SA. There was actually a request from the Mayor of Kangaroo Island for bananas, and within 36 hours pallets of bananas were on the ferry, bound for the Island, where they were then quickly routed onto emergency fire-fighters and front-line workers. The Mayor commented on how efficiently our response was managed. This again was a partnership with SAPML and selected market wholesalers that brought about a quick outcome in times of adversity. We understand growers and wholesalers are busy, they have crops to monitor, processes and businesses to run. By partnering with Foodbank, and keeping a regular flow of supplies flowing to our warehouse, we can together make a positive difference to the lives of children and families experiencing hardship.”

Mr Royans also notes that Foodbank has the capacity to be innovative with larger volume donations. He recalled last year, during lockdowns for the COVID-19 pandemic, the organisation received around a very large quantity of pallets of tomatoes. Whilst much of this was distributed as fresh produce to families in need, due to shelf-life parameters, some were converted into pasta sauce via a SA food processor – this ensured that no produce went to waste and the pasta sauce is always needed by our agencies. Another example of value-adding was turning an excess supply of pumpkins into ambient pouched soup.