One of South Australia’s most vital industries has today announced a bold plan to grow to $5...

One of South Australia’s most vital industries has today announced a bold plan to grow to $5 billion by 2030 and create thousands of jobs.

This follows last week’s destructive hailstorm that wiped out fruit crops and vineyards.

The Horticulture Coalition of South Australia (HCSA) is made up of 12 organisations that represent the more than 3000 fruit, vegetable and nut growers across the state that supply South Australia’s fresh produce.

Releasing its 2030 Blue Print, the Coalition has outlined fruit fly eradication, workforce development and water security as priorities to secure food supply for South Australians, the future of the industry and to help it grow.

Horticulture Coalition of South Australia (HCSA) Chairman Angelo Demasi said this was a crucial time for the industry that not only feeds South Australians but exported $374 million in produce in the 2019/20 financial year.

“We have set a lofty goal of $5 billion by 2030 and we believe a collaborative effort between growers, State Government and the South Australian community can achieve this,” said Mr Demasi.

“Despite devastating bushfires and crippling hailstorms, including the weather event last week, the horticulture industry has managed to grow an average of 5% per annum in the past six years.

Preserving South Australia’s enviable fruit fly free reputation has never been more important but the battle is taking its toll.

Fresh fruit growers within the outbreak areas have suffered millions of dollars in lost revenue through a lack of suitable treatment options and disruptions to market access.

“This requires a continued commitment to eradication programs as well as every South Australian with fruit trees in their backyard to be vigilant. Together we can win the war against fruit fly,” Mr Demasi said.

South Australian growers are crying out for seasonal workers with some reporting fruit being downgraded or going to waste because of a lack of labour.

“There aren’t enough workers in regional areas and we need to look at how we can attract people from the city as well as continue to use migrant workers,” said Mr Demasi.

Continued investment in programs such as the highly successful SA Government $5 million labour workforce program will help to facilitate places and quarantine arrangements for international workers.

The Coalition is also calling for government-subsidised cadetships and graduate programs to increase the number of skilled workers on farms with a particular focus on technology and innovation.

“There are so many exciting and varied career pathways available to young people who want to work in horticulture.  We estimate this will continue to grow with an additional 3,000 full-time jobs created by 2030,” said Mr Demasi.

Water availability, security and affordability across all production regions are critical for horticultural production and will rely on maintaining the rights of water licence holders.

“Industry and government must work together on a water plan to ensure we have a balanced approach between irrigators, the environment and urban use,” said Mr Demasi.

The Coalition is calling for protection of the state’s water sharing agreement for the Murray Darling Basin and additional investment in flood mitigation around the Gawler River floodplain.

“The Horticulture Coalition of SA is committed to working with the government of the day to achieve the full potential of one of the state’s most important industries,” said Mr Demasi.

“The actions we take now will set us on the path to achieving our goal, for the benefit of all South Australians.

“Securing our food supply for future generations is the key aim of this bold plan.”

Click Here for a copy of the Horticultural Blueprint 2021. 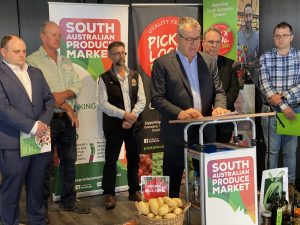